Contact Nancy R. Bartlit
View a list and summaries of her talk topics
Nancy is available to give talks to your
company, organization, conference, or group.

Nancy R. Bartlit is a World War II historian, lecturer, author, and co-owner of Pajarito Press LLC. Bartlit earned a BA in History from Smith College in Massachusetts, then traveled to Sendai, Japan, thirteen years after WWII ended in 1945, to teach English to high school students, UNESCO students, and scientists at a research institute. Years later, she returned to Japan while enrolled in a program on Japanese industry and technology, which included tours to eleven research laboratories. She earned an MA in International Communications from the University of New Mexico.

She arrived in Los Alamos in 1962 when her husband John came to the Los Alamos National Laboratory as a research engineer in cryogenics and, later, fusion energy. The two of them led efforts to preserve New Mexico’s azure skies—which were so important to scientists during the Manhattan Project—and were honored as Los Alamos Living Treasures.

Nancy was elected to several terms on the Los Alamos County Council, was its Chairman, and, later, was elected President of the Los Alamos Historical Society. The Society was founded in 1968 to preserve Los Alamos history through supporting a lecture series, publishing unique books, running a museum, and building community archives.

Her book Silent Voices of World War II, coauthored with University of New Mexico Distinguished Professor Everett M. Rogers, was published in 2005. (It is currently being revised, updated, and re-edited for technical and historical accuracy and published by Pajarito Press LLC.) Since then she has given talks on New Mexico’s role in ending World War II which include experiences of the U.S. Army Bataan Death March survivors, the U.S. Marine Navajo Code Talkers, the civilian males of Japanese descent held in the Santa Fe Internment Camp, and the scientists and miliary personnel assigned to Los Alamos during the Manhattan Project. She is registered with the New Mexico Humanities Council and the Historical Society of New Mexico Speakers’ Bureau.

Bartlit first told Los Alamos history to a symposium held on Tinian Island in 2010. Why was New Mexico selected to be so important to the vital research of atomic weapons? What was life like as a Boys Ranch School in a forest of Ponderosa pine trees expanded into a secret research laboratory where explosive testing in the canyons shook windows and walls to break the silence of the wilderness?

For a decade Bartlit collaborated with the Atomic Heritage Foundation and officials from New Mexico; Oak Ridge, Tennessee; Hanford, Washington, and the National Park Service to promote a Manhattan Project National Historical Park. Los Alamos now shares Park Headquarters with the other two communities. One can witness a virtual viewing of the five historic sites left from war atomic weapons research in Los Alamos in the Laboratory’s Bradbury Science Museum.


A Warm and Enthusiastic Welcome as Nancy Spoke to the San Juan County
Historical Society on October 11, 2017, in Aztec, New Mexico... 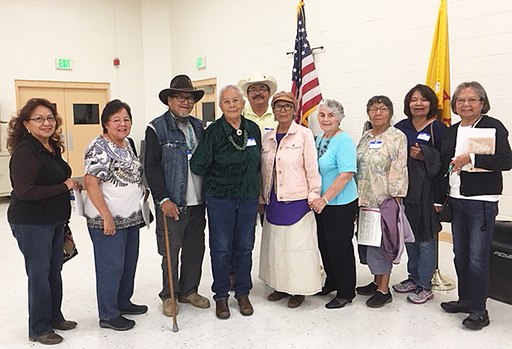 From 1942 until the end of
World War II the Navajo code was never broken by the enemy. Between 350–420 young Navajo U.S. Marines, trained in a unique language, fought from Guadalcanal through Okinawa, a territory of Japan. Their military commander claimed that they shortened the war by a year. She'll describe how the code was initiated by the original 29 Navajo U.S. Marine radiomen who had deep knowledge of Navajo culture and environment, how the number of code talkers expanded to serve in six Marine divisions forcing increased vocabulary as new technology was introduced on the battlefield, and how the "code-within-a-code" protected its secrecy. With precise accuracy the code was put to use in the Pacific theater allowing the allied forces to island hop and get closer to target Japan. 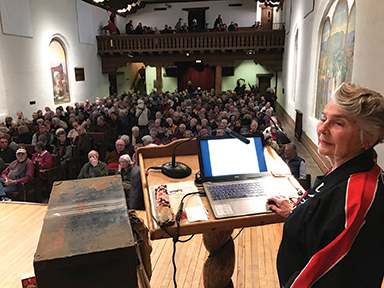 
Photos: Nancy presenting to a packed house, "The Santa Fe Internment Camp in the Shadow of Los Alamos, 1942-1946," in the St. Francis Auditorium, New Mexico Art Museum on Tuesday, February 28, 2017. For those interested in the Santa Fe Internment Camp history, you would find Robert Mott's interview with Nancy, "South of Atomic City, a second secret community during WWII," as it appeared in the Santa Fe New Mexican, February 27, 2017.

In the article, New Mexico, Japan Bound by Technology and Tragedy, Nancy is interviewed by Margaret Wright, who gives you the opportunity to read Nancy's comments and gather the history that was built in the Pacific Theater during WWII. Here are two links where you can read about and also listen to Nancy's position on the atomic bombs:
Read Margaret Wright's article and see the short video: Trinity: 70 Years Later...
Read Nancy's Perspective: Nancy's View—Were Two Bombs Necessary?

Photos clockwise   •   Nancy sitting in MacArthur's chair in Hotel Manilla in the Philippine Islands.
•  Nancy with U.S. Senator Jeff Bingaman and Sharon Stover, former Los Alamos County Chair with "Oppie" and Groves bronze sculptures. Bingaman and U.S. Senator Tom Udall, introduced legislation that resulted in the creation of the Manhattan Project National Historical Park, which is inclusive of the three cities instrumental in atomic research and development: Los Alamos, NM, Oakridge, TN, and Hanford, WA.   •   Nancy with Vincente & Celia Ojinaga at the Santa Fe Library in 2006.  •   Nancy presenting one of her seminars for the Los Alamos Historical Society docents and tour guide trainees in June, 2015.